Son of a Finn can he play guitar.

JML Music is John Michael Lind, a prairie-boy-turned-died-in-the-wool west coaster phenom. Lind couldn’t have come on the scene at a better time. As baby boomers wake up to living their lives bigger than ever before they have a champion in Lind who, in his 50s, moved from studying the folk acoustic masters and hiding his talent at his house full of guitars…to full stage, standing-O, sweet-tenored madness in front of major audiences. Lind reminds us how amazing we all are when we put our music where our mouths ought to be.

Lind has boomed acoustic new music and favourite covers into winning on stage. Winning at festivals. Winning with crowds and fans. Winning in the studio with his latest release, Burning Road.  His sweet tenor voice draws you in and his compelling snap-to-it lyrics connect with you right where it counts. Bringing original music coupled with his personal energy to the likes of John Prine, Van Morrison, Townes Van Zandt and more, Lind has been winning audiences over in western Canadian festivals, indie venues and home concerts for years.

Lind’s 2014 debut CD Out on the Land delivered six finely crafted original songs about parenting, being on the land, heart smashes, belonging, and of course, snow. Produced by East Vancouver powerhouse Allan Rodger, the Georgia Straight calls Out on the Land a “crisp-sounding EP… Lind’s ticket to the next level of fame.”

Picking up his brother’s guitar, Lind began jamming around the city. Early-onset parenthood diverted him from pursuing his budding musical dreams for more than 20 years, but late-night lullabies and songs written for sleeping kids became his very own hard-won musical debut.

His vision: sing your truth, be your truth, trust your truth. Music is truth. That’s why people love him and love what his music brings.

“This crisp-sounding EP should be Lind’s ticket to the next level of fame.”

“Out on the Land’s title track [is] a modern-day dust-bowl ballad about an old man living out his declining days on the prairie, and there’s clearly something real to it.”

“Beautiful Dancing Lady is a song of desire and seduction…”

“…an attractive light tenor… knows his way around a guitar.” Georgia Straight

“Oh my God, it was so awesome! John laid out the tunes, he was deadly! We can’t wait to have him back.” Darren Carter 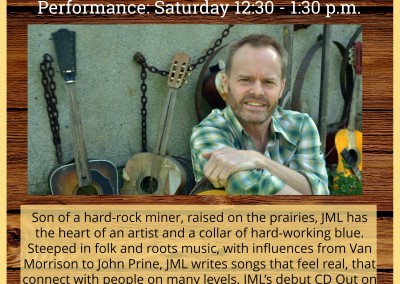 See the full gallery (colour and black and white).