First Week of the Burning Road Tour Has Been Big

This is a new idea for me – a newsletter. People have asked me to share more about my journeys, my travels, and travails, so I will now be sending you newsletters as the impulse strikes me.

This, the inaugural, is about the first week of my Burning Road tour. And it’s been magical; wondrous.

First, a disclaimer: I named the tour after my new single, Burning Road, and well before the forest fires made the name eerily appropriate. I would like to say that I don’t believe I have the awesome power to influence reality, via the widely referenced “jinx” mechanism. In other words, I don’t believe I am the cause of the fires. Here’s a picture of a fire north of New Denver. 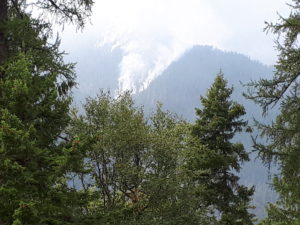 And it has been smoky out here. This first week I’ve been from Revelstoke to Fernie, and back to Revelstoke, and despite all the hills I have been driving up and down, there is no visible evidence of mountains here in southern BC. In fact, geographical certainties such as Kootenay Lake have mostly disappeared from view. It’s eerie. I rode the Galena Bay ferry yesterday and it was like being in a fog, nothing visible beyond 100m from the boat.

There were barn swallows on the ferry! They fly along with and dart all over the ship. Once we were underway the breeze became almost too much for the wee birds and try as they did they couldn’t reach the bow. I even saw a swallow hovering like a seagull on the wind! They never do that. They’re dippers and dancers. And even stranger, they were walking on the deck. I have never seen a swallow land anywhere but at the nest. Interesting, fun and cool. I love watching their amazing aeronautics. Swallows. Ya!

I played in Kaslo the other night, at the lovely BlueBelle Bistro. Very good food, excellent staff, a nice place. A newlywed couple honeymooning from Spokane Washington, Andy and Sami, were in the audience loving each other, loving life and loving the music. They bought one of my CDs for their travels. Very nice. Thanks guys!

I often have a bit of downtime during the day, so in addition to all the music work I need to do, I do some sightseeing. And in Kaslo, that means the SS Moyie. Yes, the Moyie is the world’s only intact stern wheel paddle wheeler, and it has been restored to its former glory. And how glorious it is! People travelled in such style back then. The saloons are decorated in original gold-leaf, there are Persian carpets, massive Victorian furniture pieces, a parquet floor designed to flex with ship’s movement, stately staterooms and the ghosts of liveried crew serving your needs.

Below decks is a dream for a gearhead like me, with the original huge boiler and the steam engines that drove the big back paddlewheel all looking ready for a load of coal and a match to puff the big boat away. There are antique cars on the freight deck, plus loads of local fruit crates, chickens, lumber, you name it. Those steamers were the lifeline of these far-flung mining and logging communities back before highways connected everything.

Go to Kaslo. Check out the SS Moyie. I return to Kaslo next week to play at the venerable Kaslo Hotel Pub, and I may visit the Moyie again!

Staying with the early transportation theme, I played in Nelson the other night, at the big old Royal Hotel on Baker, and in Nelson they have a fully restored streetcar you can ride along the waterfront! It’s a trip and a half!

In Fernie I played at the Infinitea Tea Bar, which is also in a hotel called the Royal. It also happens to be less than 100 feet from the rail line carrying coal out to the coast, which plays right into two of my favourite songs to play: Steve Earle’s I Ain’t Ever Satisfied, and John Prine’s Paradise. I like when things line up like that.

BC is so beautiful, I am running into lots of tourists on my tour. Europeans love it here. I just this minute spoke with a family from the UK out here mountain biking the fantastic trails around Revelstoke; I’ve run into Germans, South Africans, Scandinavians and more. But by far: Aussies. I swear, Canada is becoming a tri-lingual country: French, English, and Oz! And I’m glad to have ‘em here. Aussies are fun, friendly and hard-working, hard-playing folk. Welcome!

A friendly and talented Aussie, Yvan, who I met in Revelstoke in May when I played the Last Drop Pub, was playing his cool dream-reggae looped music on the patio before my show, and I asked him to sit in on my last set, again at the Last Drop. That was fun! He brought his bass up and added some solid bottom end and sweet high vocals to the mix. I really enjoyed that!

Being on the road means keeping focused on preparing for the work, and staying in shape to perform. The beginning part of the tour was 5 shows in 5 nights, with 3 of those nights 3-hour shows! That’s a lot of singing and guitaring. Keeping the voice healthy, and keeping some flesh on the fingertips, is key. Sleep is a precious commodity on tour, and I’m taking every chance I get to nap and rest. No singing while driving, and even keeping conversation to a minimum matters, especially in bars after the show. I made a turmeric tea blend that I brew up as needed, and it really helps. And lots of water. Lots of water.

Today and tomorrow are off days for me, yay!, so catching up on email and assorted music business gets done, plus plain old rest. It’s my weekend in the middle of the week.

I head to Windermere next. I’m playing at the White House! Lol. Then it’s off to… I don’t remember, but there is a list here on my website. I’ll check that out.

Until next time my wonderful fans! See you at a show.

This site uses Akismet to reduce spam. Learn how your comment data is processed.