Of All The Great Lyrics He’s Written, Which One Do You Think Is John Prine’s Favourite?

I like this interview with John Prine here in Rolling Stone magazine. His voice really comes through, he talks like he writes! 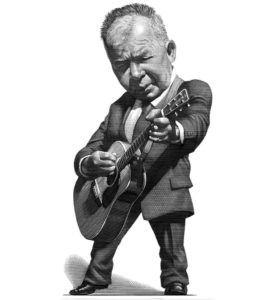 Since breaking through in 1971 with a classic album he wrote as a mailman in Illinois, John Prine has created some of the strangest, funniest, most surreal and most enduring songs of our time. He’s been covered by Bob Dylan, Johnny Cash and Bonnie Raitt (who popularized his classic “Angel From Montgomery”). But Prine has not always been prolific; on April 13th, he is releasing The Tree of Forgiveness, his first album in 13 years. It comes as Prine is being embraced as an influence by younger Americana artists like Sturgill Simpson and Margo Price. Here, Prine shares the lessons he’s learned along the way.

What piece of advice would you give to a young songwriter?
Don’t worry so much about rhymes. Try to please yourself, and don’t think about commercial stuff. I think if you write from your own gut, you’ll come up with something interesting, whereas if you sit around guessing what people want, you end up with the kind of same schlock that everybody else has got.

What lyric of yours are you most proud of?
“There’s a hole in Daddy’s arm where all the money goes/Jesus Christ died for nothin’, I suppose” [1971’s “Sam Stone”]. I was trying to say something about our soldiers who’d go over to Vietnam, killing people and not knowing why you were there. And then a lot of soldiers came home and got hooked on drugs and never could get off of it. [For the next line] I was just trying to think of something as hopeless as that. My mind went right to “Jesus Christ died for nothin’, I suppose.” I said, “That’s pretty hopeless.”

Johnny Cash left out the Jesus line when he covered it. What was the audience reaction like when you performed it?
Some people walked out. One woman stood up and told me I insulted her intelligence. I’m thinking, “Let me see your diploma.”

Cash called you one of his favorite songwriters in his autobiography. Do you have any stories about him?
When I turned 40, I invited Johnny Cash to my party, even though I knew there was gonna be 200 people, roasting a pig and wild as can be. He didn’t come, but the next day, I got a bowl of chili he’d made and a note that said, “John, I’d love to come to your party, but that would mean I would have to leave my house.” I still have it somewhere, probably pressed inside a Bible or something. We’re getting ready to move. That’s when I find stuff.

One of your most famous songs, “Angel From Montgomery,” begins, “I am an old woman/Named after my mother.” What made you comfortable using a female perspective?
Nobody told me you weren’t supposed to. Ignorance is bliss as a writer, I think. I always had an affinity for older people. I had a job delivering newspapers, and one place I had to go was an old people’s home. Some people would introduce you to their neighbors as if you were a nephew or grandson. They didn’t get many visitors, so they acted like you were coming to see them. And that stuck with me for a long time. I think I was 22 when I wrote that.

You made four classic albums for Atlantic Records in the Seventies. But you left in 1975. What happened?
Ahmet Ertegun wasn’t particularly taking any kind of attention to what I was doing. They had the Stones and Led Zeppelin, and he was always on the road with them, enjoying himself, and I was like, “That’s great, but what am I doing here?” I told him I wanted to leave. He charged me $11,000 to get out of my contract. Then he said, “Is there anything I can do for you?” I said, “Lend me your limo, I’m gonna go up to Hartford tonight and see the Rolling Thunder Revue.” And, man, it was so good.

What’s the best part of success?
Being able to find a car on eBay and just buy it. I go window-shopping online and pick five cars I want, but I’ve got no place to put ’em. Even when I was a mailman, I thought success was, if you can get all your bills paid and you get to sleep late and your friends don’t talk about you, that’s success.

What does being happy do to your songwriting?
It slows it down. Not that all I wrote about were disasters, but some of the best stuff is. When you get your heart broken, you’ve got all the time in the world to write about it: how it feels, what the temperature was that day. When you’re happy, the last thing you want to do is slow down and write a song, unless it’s “Zip-a-Dee-Doo-Dah.”

Your wife, Fiona, is Irish, and you live over there part-time. What’s the best part of living there?
The Guinness. Guinness is a dreamy, dreamy beer when you get the right stuff. And the Irish are really nice people. And there’s characters. I met a guy named Johnny Cagney who was about 85, and he told me he’s written over 900 ballads and proceeded to sing some of them to me. We got a cottage just south of Galway town. The town’s got nine pubs and two grocery stores [laughs]. You just stop in for a beer here and there. Pretty soon, you know all the news around town.

You didn’t become a father until you were 48. How did it change you?
It brought me right down to earth. I was a dreamer. I learned real fast I don’t know anything except songwriting. Since kids have innocence, they can cut through the bullshit. I asked my son Tommy to sing with me in Birmingham when he was five or six. He comes offstage, and I said, “How was that, Tommy? Did you like that?” He goes, “That’s not real. Baseball is real.”